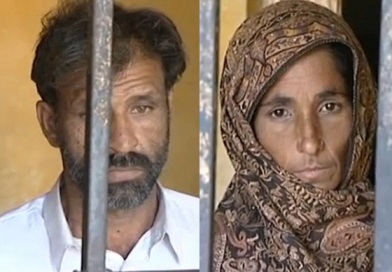 ISLAMABAD — A Pakistani couple accused of killing their 15-year-old daughter by pouring acid on her carried out the attack because she sullied the family’s honor by looking at a boy, the couple said in an interview broadcast Monday by the BBC.

The girl’s death underlines the problem of so-called “honor killings” in Pakistan where women are often killed for marrying or having relationships not approved by their families or because they are perceived to have somehow dishonored their family.

The girl’s parents, Mohammad Zafar and his wife Zaheen, recounted the Oct. 29 incident from jail. The father said the girl had turned to look at a boy who drove by on a motorcycle, and he told her it was wrong.

“She said `I didn’t do it on purpose. I won’t look again.’ By then I had already thrown the acid. It was her destiny to die this way,” the girl’s mother told the British broadcaster.

Horrific stories, such as this one, is reported by the media throughout the western world for a specific reason. That reason is to demonize Islamic countries, so that the West will not perceive western expansion as imperialism, but instead, as a noble attempt at achieving peace and unity under global governance. This can be seen in the following links entitled “Parents Arrested for ‘Honor’ Killing Daughter With Acid“, “Changing Laws Pt. 7 – The Growing Problem & the Horrific Solution” and “Thesis – Antithesis – Synthesis Pt. 1 – Islam“.

Western expansion is not for the good of mankind, and the mainstream media is a tool for social engineering, and therefore, cannot be trusted. In order to be free of the mind control of elite globalists, one must find truth, which is not broadcasted by the mainstream media. Truth is found in the word of God, and truth is a person – the Lord Jesus Christ. He promised give the light of truth to everyone who learns from him, and to free them from their sins. He does not promise peace to this world, but the sword of division, and the destruction of this world’s system. Therefore, to escape the coming destruction of this sinful world, one must turn away from sin, and place one’s trust in him.

Their is killing that will bring honor, but it is neither the tyrannical murder of Islam, nor the deceptive peace killings of global governance, but it is the return of Jesus Christ, who will judge this world in righteousness, and bring everyone before him to give an account for their evil deeds.

Mark 1
15 The time is fulfilled, and the kingdom of God is at hand: repent ye, and believe the gospel.